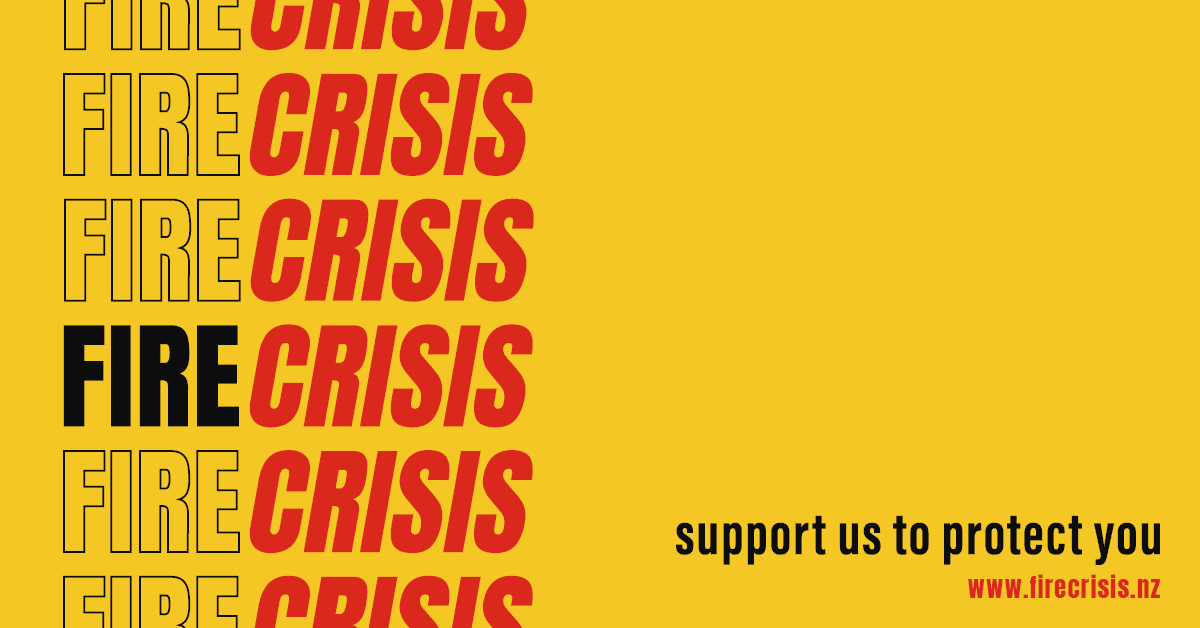 This Saturday there were 22 gaps in firefighter coverage, as a result of Fire and Emergency failing to employ enough staff, resulting in 5 fire trucks unavailable for emergencies due to no staff, and many more dangerously short-staffed with less than four.

This comes less than 24 hours after Union members across New Zealand participated in a one hour work stoppage highlighting these dangerous staffing levels, along with failing and ageing fire trucks and fleet, reductions in safe systems of work, psychological trauma, cancer risks and barely living wage working conditions.

Saturday’s staffing shortages means there were only 96 Firefighters left to protect Auckland’s population of 1.6 million people, an almost 20% reduction in the level of service that, in all likelihood, will stretch resources and cause delays in the arrival of effective fire crews to emergencies.  Even before these shortages, Auckland already has less than half the number of Career Firefighters per capita than any other region in New Zealand.

These shortages are now the norm with almost daily reports of Firefighter and Emergency Dispatcher shortages throughout not only Tamaki Makaurau but the rest of the country.

Minimum Safe Staffing levels of Firefighters are the cornerstone to safe systems of work for Firefighters and the members of the public.  Every time these numbers are unable to be maintained presents a serious health and safety concern to not only Firefighters but the public at large.

Instructions for Short Staffing or Fire Trucks Unable to be Crewed

Every time safe systems of work are unable to be maintained, including fire trucks staffed below safe levels, or fire trucks unable to be crewed, these must be reported and entered into the Safe at Work kiosk as a near miss.  Additionally, if at an emergency incident an accident or event occurs as a result of unsafe crewing levels,  this MUST also be reported.

Rostering staff have gone above and beyond throughout this Fire Crisis trying to find coverage for vacancies to ensure safe systems of work are maintained.  Unfortunately, they are not being backed up by the Fire and Emergency District Managers whose job it is to ensure that the Minimum Shift Staffing of Firefighters and Dispatchers throughout Auckland is maintained, and the public is kept safe.  The Local has attempted to find agreement on multiple occasions with Fire and Emergency without success.

Once Rostering staff have exhausted options currently available to them and allowed, any unfilled vacancies are to be presented to the on-call Manager for them to fill.  It is NOT the job of Rostering staff to make operational decisions around which stations to keep open or which to close, or which people to move. These are decisions that must be made by Fire and Emergency Management.

Instruction for all Staff

If staff are asked to move stations or positions, this will be done AFTER the member has started their shift and at Fire and Emergency’s expense.

Note - Officers can choose to work as Firefighters but CANNOT be compelled to do so.

We recognise that this may present some disruption to members, but it could easily have been prevented had Fire and Emergency planned for additional staffing and not cancelled several recruit courses which would have addressed some of these shortages.

It has become more and more difficult for Firefighters, whose role it is to allocate staff to work additional hours, to find available staff to work.  The problem has been around for many years and Firefighters have worked long hours in an attempt to fill the gaps.  The staffing problem will take some time to solve and requires decisive leadership now to attempt to flatten the curve.  Fire and Emergency leadership seems intent on managing the shortage rather than addressing the problem.

To date, Fire and Emergency’s response to the crisis of staffing levels has been to deny that it actually exists, and instead of acknowledging and addressing the problem they have cancelled recruit courses that would have helped to stabilise staffing and refused to acknowledge in a Collective Agreement the necessity of staffing numbers, where they are required, at what stations and safe numbers of Firefighters.

Recruiting and increasing Firefighter numbers throughout not only Tamaki Makarau but the rest of the country is the only solution to this crisis, however, Fire and Emergency are struggling to find quality candidates that want to join up as Career Firefighters.

Career Firefighters are an essential component of the nation’s fire cover and make up 17% of all New Zealand Firefighters, yet they attend by far the majority of emergency incidents and protect 70% of the population of New Zealand from Invercargill to Whangarei.

The Local continues to advocate for safe systems of work, and these recommendations are not made lightly.  Firefighters and Emergency Dispatchers have had enough of being taken advantage of by an organisation that purports to stand by the values of "We Do the Right Thing", "We are Better Together", We Serve and Support" and "We Strive to Improve".

Fire and Emergency’s actions have spoken much louder than these empty words on the page they say they follow.