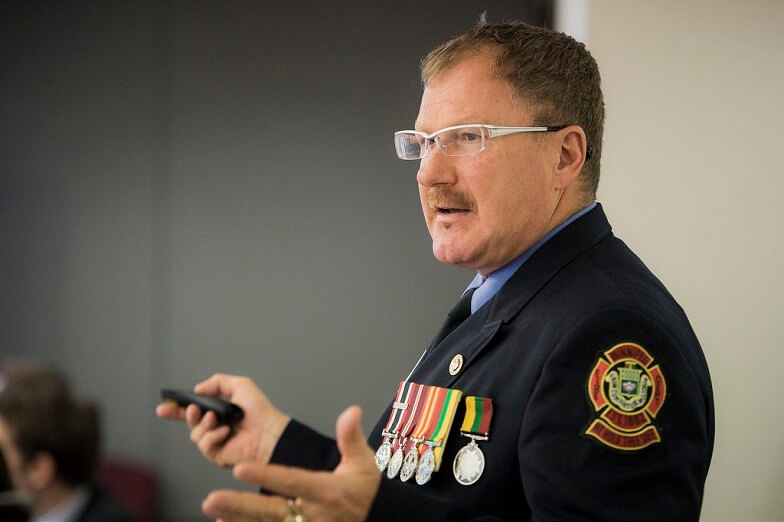 We are thrilled to confirm that international expert/firefighter/lawyer and Winnipeg Firefighters Union President Alex Forrest will be here next month to kick off the NZPFU campaign for presumptive legislation to recognise firefighters’ occupational cancer.

Alex has been instrumental in the development of legislation to presume specific cancers are work-related illnesses to enable firefighters to access their entitlements in the USA, Canada and Australia. He is currently assisting firefighters and their unions in Europe. Alex also has the extraordinary experience of being invited to observe the World Health Organisation International Agency For Research on Cancer (IARC) Monograph group as a lay specialist. This is extremely rare and testament to his expertise and credibility.

Alex has generously found time in his busy schedule to spend two weeks here in March to meet with politicians and educate the public through media interviews.

The NZPFU campaign centres on educating our political leaders and the public about why firefighters get cancer, why it is work-related, why their claims are being rejected by ACC and why presumptive legislation is necessary to ensure firefighters can access their entitlements as they would for any other work-related injury.

The campaign is launched with a function at Parliament for all Members of Parliament on the evening of Wednesday 20 March 2019. Alex will be the keynote speaker providing a brief introduction to the issue of firefighters’ occupational cancer. The evidential basis and the need for presumptive legislation. During that week Alex will join the Committee in meeting with politicians from across the political spectrum seeking their support for an amendment to the ACC legislation to ensure firefighters can access their entitlements for occupational cancer as they would for any work-related injury.

Firefighters with cancer, and families of firefighters who lost the battle with cancer, will join us in media interviews around the country. Alex and I hope to visit stations and talk to members on the various stops we will be making – we will let your Local know.

Each and every member can assist the campaign by educating family, friends and community groups about firefighters’ occupational cancer and why presumptive legislation is needed to prevent costly and stressful litigation to access their entitlements for work-related illness. Below are some facts to help you with that message:

Firefighting is a dangerous occupation and firefighters put their quantity and quality of life on the line every time they respond. Some are injured while attending fires and incidents but the most common killer of firefighters is less obvious – occupational cancer.

Firefighters are exposed to a lethal cocktail of toxins and chemicals at every structural fire and other incidents. It is not one fire that kills them – it is the years of responding to structural fires that is killing them. Surprisingly some of the most toxic fires are the house fires which firefighters respond to repeatedly over their career of service to the community. Even the best personal protective uniforms and equipment (such as breathing apparatus) can never fully protect firefighters as their firefighting uniforms have to breathe to avoid metabolic heat build-up. Firefighters absorb the lethal toxins and carcinogens through their skin.

Firefighters are one of the most researched occupations in the incidence and mortality of cancer. The debate is over – there is a list of cancers that are occupational cancers for professional career firefighters. Despite the internationally accepted and credible wealth of evidence, firelighters struggle to access their entitlements for this workplace injury.

Presumptive legislation won’t stop the absorption of the carcinogens but it will enable the firefighter to concentrate on treatment without having to worry about how their family will cope economically if they unable to work, or do not survive the cancer. Battling occupational cancer is tough enough without having to fight for wages and face mounting legal bills and stressful litigation. Presumptive legislation does not provide for new entitlements, it is a mechanism to ensure the firefighters can access their entitlements.

Here are some reasons why you should ensure that New Zealand’s firefighters – our protectors – get the legislative protection they deserve:

Internationally firefighters have struggled to access their entitlements for occupational cancer because they cannot prove which fires and which carcinogens they were exposed to which resulted in the contraction of the cancer. We know that it is an accumulation of exposures. The mass of research that has repeatedly and consistently showed the increase of specific cancers has been accepted by USA, Canada and Australian Governments as credible evidence of the link between career firefighting and these cancers. Those Governments enacted presumptive legislation to presume that the specific cancers for firefighters that meet a qualifying requirement are work-related and therefore can access their entitlements as they would for any other work-related injury or illness.

It is time New Zealand’s professional career firefighters had the same protection.