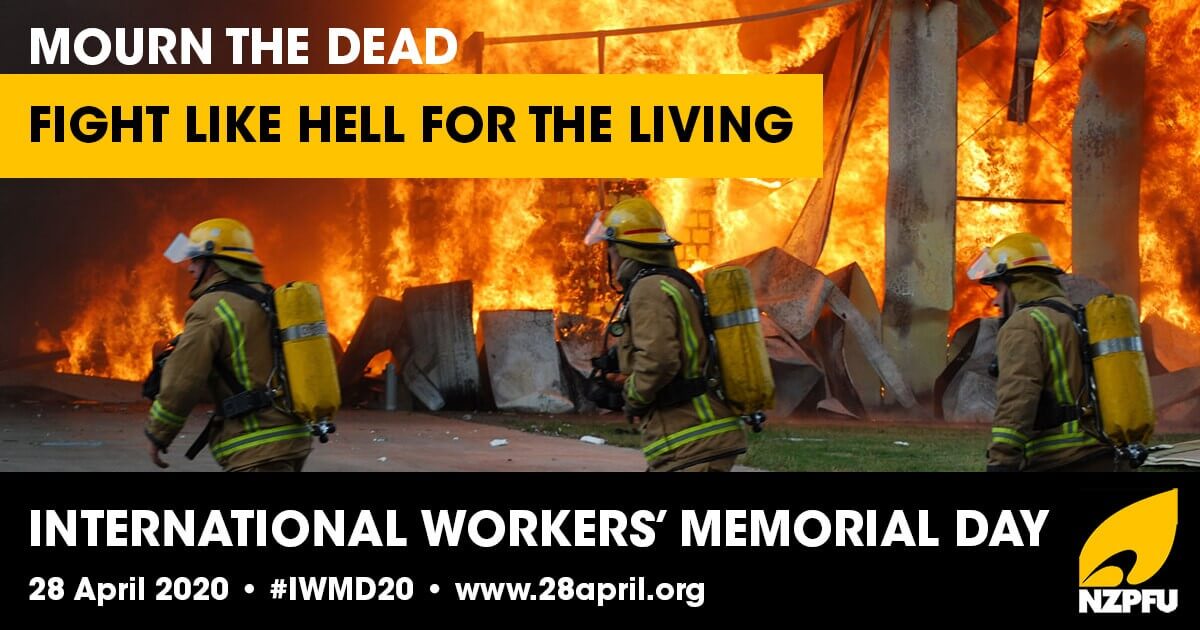 Mourn the dead, fight like hell for the living

Today we remember all workers who have died through workplace accidents and illnesses, and we vow to keep pushing for safer workplaces and better compensation for those left behind.

For our members, today's photo will be instantly recognised as the Tamahere Coldstore fire on 5 April 2008 which claimed the life of Hamilton Senior Station Officer Derek Lovell and seriously injured seven of his colleagues.  The fatal blast brought into focus the dangers of a dynamic workplace and the sacrifices firefighters make to protect the community.  We pay tribute to SSO Lovel and extend our support and comradery to his families, friends and colleagues.  He will not be forgotten.

The Worksafe website reports that 22 workers have died in New Zealand this year to date and 108 perished last year.   Many more were seriously injured.  An estimated 600-900 workers die in New Zealand every year from work-related disease.   For firefighters the biggest killer is occupational cancer.  Firefighters are exposed to a cocktail of carcinogens at every structural fire and are diagnosed with some cancers 5 times the rate of the general population.

Sobering statistics.  Thousands of families grief stricken with many left without their main income earner.

And then there is mental health issues as a result of exposures to trauma.  The statistics do not include those that struggle with or succumb to depression, anxiety and post traumatic injury.

This year workplace disease is high on the agenda with workers diagnosed with Covid-19 while serving their community.

Supermarket workers, rest home and community carers, social workers, cleaners, food producers, bulk store personnel and couriers/drivers are now recognised as essential services alongside medical practices, nurses, medical practitioners, ambulance officers and firefighters.  While the rest of us have been doing our bit staying in our bubbles, these workers have left the security of their own homes to keep the country churning.

The workers that previously have largely gone unnoticed are now properly respected and recognised by the public but only time will tell whether every reasonable and available protection was afforded to these new front-line workers.  Were they provided with the correct Personal Protective Equipment and earlier enough? Were they taught how to use it?

Fighting like hell for the living on 2020 means fighting for PPE, fighting for safe systems of work, fighting for fair recompense for the essential work they do, and fighting for Covid-19 to be recognised as a work-related illness so that the workers affected are granted ACC entitlements.

Firefighters have continued their response to medical calls, fires and other emergencies throughout Covid-19.  Firefighters are once again putting their quality and quantity of live to serve and protect the community.  The risk of contracting Covid-19 adds to the list of possible and probably work-related illness.

Our fight for presumptive legislation to recognise firefighters' occupational cancer continues with an election campaign post the National crisis.  That campaign will be extended to include recognition of Covid-19 in ACC legislation for all workers.