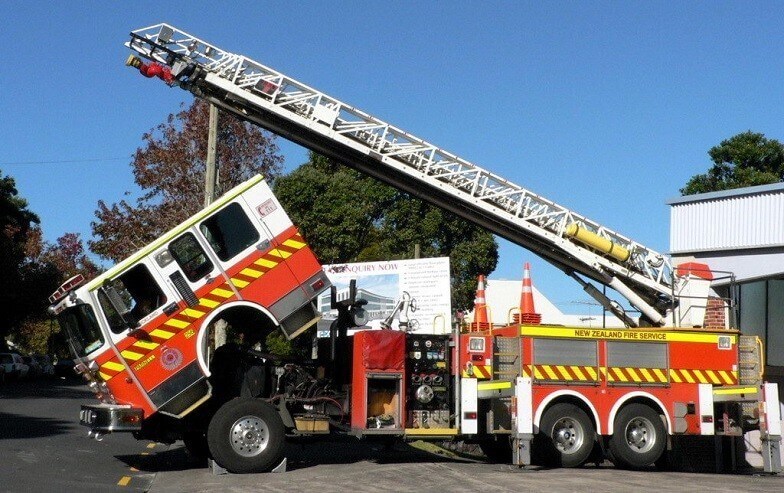 Members will be aware that for almost a year Auckland’s largest and newest Heavy Aerial Fire Truck has been away for repairs, meaning that the 25 year old Relief Turn Table Ladder (TTL) has had to be used as a front line response aerial in its place.

This week, the 25 year old Relief Aerial Truck has had to go away for repairs and servicing, expected to last at least 2 weeks. FENZ has known about this service requirement for months and once again there is no provision in place for a spare aerial to replace it whilst it is away.

This was just the scenario that presented when the International Convention Centre (ICC) caught fire late last year, and FENZ had to scramble to get an aerial appliance back in commission, respond another one from Hamilton with the majority of the heavy aerials arriving several hours after the fire had started, and, in the Local’s and many firefighters’ opinions, too late to be effective.

Since the ICC fire, FENZ has made no improvements to the state of the heavy aerial fleet in New Zealand, with a National Aerial strategy still not having been agreed to and implemented, nor a timeframe for the replacement of ageing heavy aerial fleet presented.

On 14 April 2020 the Local wrote to Auckland Area Management expressing our concerns about a similar such scenario, where we warned FENZ that the Auckland Local would be unlikely to support any future reduction in aerial resourcing, capability or response either temporary or longer term.

A recent operational instruction from FENZ dated 23 July (copied below and sent to Auckland Central Officers, Management Teams and Fire Communication Dispatch Management) has ordered Officers not to call for aerial appliances whilst the relief is away for repairs, unless there is confirmation that there is a fire (by which time it may be too late):

An impact of this instruction seems to be a policy change from FENZ that now means that Fire Alarm activations are NOT considered to be a fire unless proven otherwise. This goes against the advice given to building occupants that assumes that all alarm activations are considered a fire and to make a timely evacuation of the building. To delay or assume otherwise would be a serious breach of Fire Evacuation guidelines.

These heavy specialised fire trucks are an essential tool for officers to use at fires, high-rise incidents, commercial and residential buildings, fire alarm activations for access, rescues, assist Police for observation at incidents including motor vehicle accidents and assisting ambulance responding to life threatening medical events.

The Union’s prior advice to members of 24 August last year, (Reminder to Members about Aerial Appliance Responses) remains as follows:

“A priority message requesting the attendance of one (a Heavy Aerial) shall immediately be transmitted if, in an Officer’s opinion, such appliance could be of benefit to them for ANY reason.

For the health and safety of our members and the members of the public and operational efficiency, the Auckland Local strongly suggests to Officers, that if responding to a first alarm in the Central Business District Area; or any other building or incident that an aerial could be a benefit to a successful outcome, and that an aerial is not on the turnout, that one is immediately called for by means of a priority message. This decision is made solely to ensure the safety and wellbeing of firefighters and the public.”

The Union believes that Safety and Well-Being legislation would more than cover any Officer that uses their training and experience (and common sense), following the above advice.

Despite many inquiries, the Local has received no answer as to the future strategy of the National Aerial Fleet, its response capabilities or expected timeframe for remedy.

A recent media article applauded the sourcing of an additional $50 million, however, it unfortunately appears that fire trucks are not on the “shopping” list.  The priorities of FENZ towards spending seems to be misguided and not aligned to any evidence-based conclusions, with millions allocated to the rebuild of fire stations serving tiny communities responding to a dozen incidents a year, whilst New Zealand’s largest metropolitan city is under-funded and serviced, in both fire appliance fleet and staffing.

We will keep members informed as any updates to this critical situation come to hand.