FENZ DISHONEST IN ITS DEALINGS WITH THE AUCKLAND TASKFORCE

In 2018  FENZ and the NZPFU signed terms of settlement that included setting up a Taskforce to consider how to address FENZ’s inability to recruit and retain sufficient firefighters and the issues affecting all NZPFU members living and working in Auckland.

The Taskforce investigation found Professional career firefighters and other staff face a unique combination of challenges living and working in Auckland, compounding the stresses of rewarding, yet demanding work, and in the resulting Report warned without intervention, Fire and Emergency’s ability to meet its legislated objectives is at risk.

“In Auckland, career firefighters, ComCen personnel, fire risk management officers and other classifications covered by the CEA (i.e. uniformed and ComCen personnel) are struggling. Due to the challenges of where they live and work, many don’t find the job as rewarding as their peers in other districts.   The wider pressures of living and working in Auckland are leading to resignations, transfer requests, increased personal stress, and recruitment challenges. The Auckland situation is also undermining organisational capability..”

The Report was the result of a two-year project.

Throughout this process FENZ representatives repeatedly claimed that funding would be available to address the issues and implement options raised through the evidential inquiry undertaken by the Auckland Taskforce.  Funding was never set aside to implement any options.

FENZ representatives repeatedly claimed that there would be the provision of ongoing funding to address the issues and implement options raised through the evidential inquiry undertaken by the Auckland Taskforce. There is no ongoing budget.

The minutes of the first meeting of the Auckland Taskforce on the 20TH November 2018 record the then Director People and Capability Brendan Nally and FENZ CFO Brett Warwick provided an overview which included:

After 2 years of research and $100,000s spent on consultants, specialist economists and project managers FENZ is now refusing to implement any of the recommendations of the Taskforce.

FENZ is only offering $400,000 in total to address the issues evidenced in the report.   That offer equates to about $13.00 gross a week per firefighter whereas the consultants report provided evidence that just by living and working in Auckland our members are disadvantaged by $10,000 per person due to the expensive housing/living/travel costs.

The NZPFU representatives on the Auckland Taskforce invested hundreds of hours including personal time to canvass the membership, undertake the research, meet with FENZ-commissioned consultants, external agencies that could give insight into some options and with the FENZ representatives on the Taskforce drafted a report that set out the evidence and listed Recommendations with options in orders of priority.

That Taskforce Report was accepted by the Auckland Taskforce Governance Group on 1 November 2019 and Brendan Nally and DCE Finance and Business Operations Darryl Purdy presented the report to the SLT on 6 November 2019.  On the 12th November 2019 the NZPFU asked for confirmation of the SLT had received the report and had determined a proposal for the recommendations that could be implemented quickly and a proposal for the recommendations that would required planned implementation.

On 12 November 2019 Brendan Nally confirmed the report had gone to ELT and he was getting some cost/benefit analysis done.  He wrote “I am hopeful to get some initiatives over the line quickly”.  This was untrue as no cost/benefit was being done. FENZ has yet to get anything across the line.

On 9 January 2020 the NZPFU followed up asking for the Recommendations that he thought he could get across the line quickly, and what cost/benefit analysis was being done.   No answer.

Finally after repeated pushing for a meeting, the Auckland Taskforce and Governance Group met on 6 March 2020.  At that meeting it was confirmed:

At that meeting it was agreed:

At the 19th June 2020 the Auckland Taskforce (NZPFU and FENZ Auckland Managers) presented an option for the immediate implementation on the basis that there would be planning for the implementation of other Recommendations.  We provided the costings (approximately $2.5 million) for a travel allowance based on 1 hour Senior Firefighter SO qualified for every shift worked stating it would be acceptable with an intention to discuss and programme the implementation of other options as outlined in the Taskforce Report.  That there were benefits for FENZ to implement this allowance including economic benefits from the current practices of firefighters staying on station longer to ensure minimum staffing was maintained during the change of shift periods.

Brendan Nally undertook to take this option back to ELT with detail on the benefit to FENZ including the current savings to FENZ with firefighters staying longer than their paid hours to wait for firefighters arriving from other stations to undertake overtime.  This and the voluntary jumping times to ensure the continuity of minimum staffing meant some firefighters were spending additional hours unpaid at work.

On 3 July Brendan Nally informed the Auckland Taskforce that he and Darryl had advocated on behalf of the Taskforce but “clear direction from ELT is we do not have the authority to commit to significant on-going cost in the order of $2 million per annum that was discussed.” Brendan has since confirmed  he never had the savings of the voluntary additional hours being undertaken by the firefighters to maintain minimum staffing calculated. Therefore Brendan and Darryl could not have presented those savings to ELT.

The end result is FENZ is walking away from the project only offering a total of $400,000 to fund a response to the issues evidenced in the report.  This equates to approximately $13 gross per firefighter a week.  Nothing

This will not do anything to address any of the issues FENZ and its staff (including Comms Centre dispatchers, FRMOs and trainers face in Auckland:

Some of the statistics in the report include:

As at July 2019 the cost of living in Auckland was much higher than other areas:

It is more difficult to recruit in Auckland

The options recommended by the Taskforce are below – attached is FENZ’s written response: 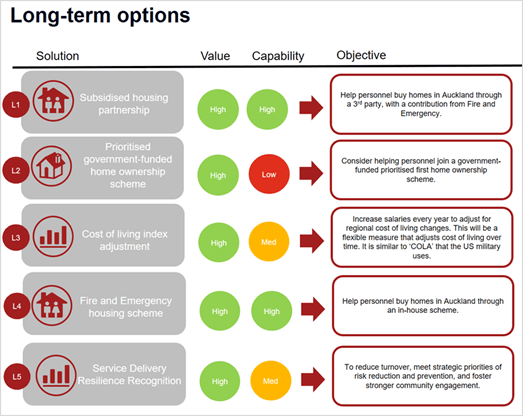 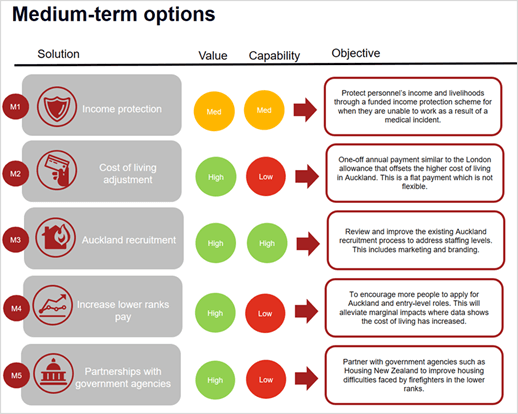 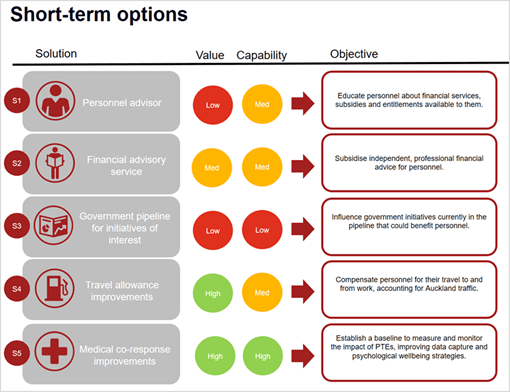 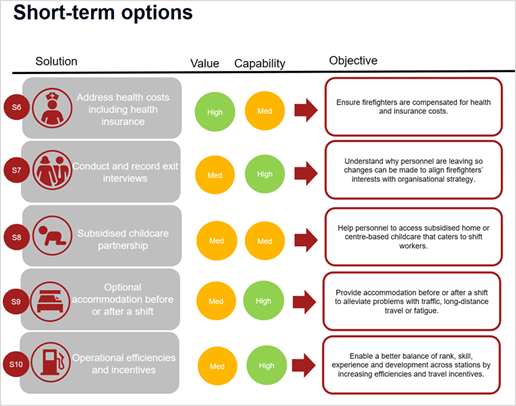