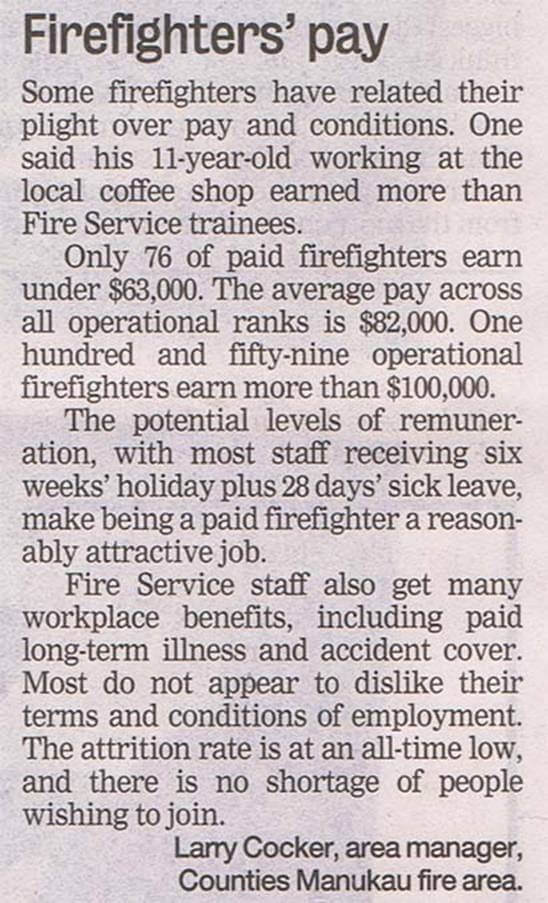 Members will, by now, have read the latest Notice related to strike action which specifically bans acting up into Executive Officer positions.

The position of the Auckland Local is, and has been since 1996, “that no member shall act up to Senior Station Officer or Station Officer under Section 66 unless the relieving in charge is on a single shift basis”.

There have been numerous resolutions passed by Auckland Local Committees since 1996 with reference to Section 66 appointments within the “D1” ranks, and the present Local Committee has reaffirmed this position with the following resolution.

“The Auckland Local re-affirms the intent of the 1996 resolution, and other resolutions since, in that no member of the NZPFU Auckland Local will act in a higher position to any rank within the CEA, unless the acting up is on a single shift basis for an emergency situation where no officer of that rank is available”.

The Auckland Local Committee is delighted with the response to the protest at the opening of the new Mt Roskill Station and congratulates the more than 200 members who responded to our calls.

We believe that the protest has gone a significant way towards the apparent change of heart by the Government towards our contract negotiations, and that the Prime Minister was impressed with the show of solidarity by our members and those from other Locals such as Hamilton.

We were particularly pleased to see Merv Neil there. Members will recall the horrifying burns Merv suffered at the Icepak fire and his heroic actions following his injuries. It is pleasing to see that he appears to be well on the way to a full recovery and we wish him well for the future.

Letter to the Editor NZ Herald by Larry Cocker.

The Auckland Local was disappointed, but not surprised, by the letter which appeared in the NZ Herald on Friday 18 September in which Larry Cocker follows the lead given to him by his master, National Commander Mike Hall. The pair of them attempt to perpetuate the myth that firefighters in New Zealand are excessively paid, and have conditions which would make MP’s blush.

Members struggling to pay mortgages would be very surprised to receive the remuneration claimed by the dynamic duo. The figures quoted by them are misleading to say the least, and anyone with any intelligence will see the contradictions in their statements.

The Union Secretary has given a breakdown of the number of hours per week any individual would have had to work to earn the sums quoted by ‘Batman and his sidekick Larry’, and members are encouraged to have a look at the breakdown which can be found on the Union website.

In brief, to earn the $120,000 that they quote, an SSO would have to work an average of 82 hours per week for 52 weeks of the year, and a SF would have to average 91 hours per week. Clearly, this is a virtual impossibility, and even if any individual did work this many hours, it is clearly in breach of the employer’s own hours of work policy and demonstrates the callous disregard for their own employees’ welfare by the senior managers of the Fire Service.

The Local is very disappointed that Larry Cocker, who is a member of the Fire Service negotiating team, should show himself to be so biased against firefighters having a decent standard of living and decent conditions of employment. We consider his ill timed outburst in the NZ Herald to be a clear conflict of interest, as he is supposed to consider any offer put to him in an unbiased manner, and clearly this will be impossible when he sits opposite the NZPFU negotiators on Wednesday to present the “new offer” that the Fire Service is apparently authorised by the Government to put forward. We would expect that National Commander Mike Hall would immediately remove him from the team, as it appears to be impossible for him to conduct any negotiations in an unbiased manner.

We look forward to the meeting on Wednesday with interest.