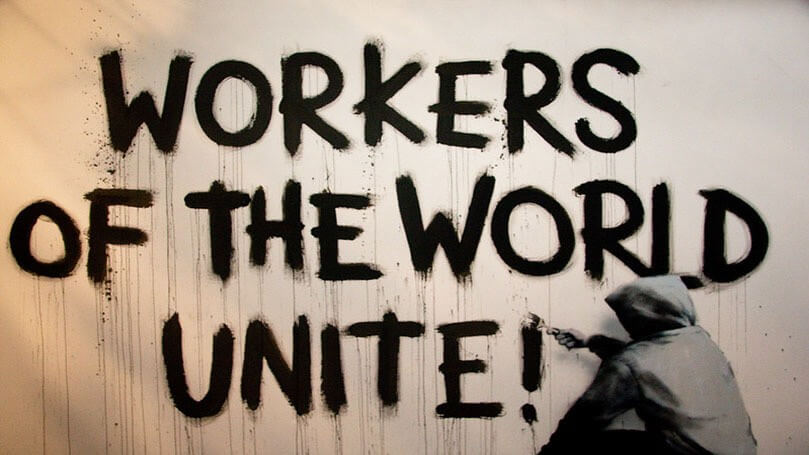 Posted 1 May '20 under Featured News

On 1 May we celebrate as part of an international workers’ movement the better working conditions we have gained as well as reflect on the struggles of the past and present.

The relevance of the date goes back as far as 1886 in Haymarket Square in Chicago where a peaceful worker’s rally for the 8-hour day ended in a bloody clash between police and protestors.  The day before, police had killed a striking worker and injured seven others.  At Haymarket Square, police and protesters were killed and injured after a bomb was thrown and police gunfire.   Whoever was responsible for the bomb was never determined but 7 protesters were sentenced to death.  In 1983, the defendants that were still alive were pardoned and the trial was heavily criticised.  The attack on peaceful protest for reasonable working conditions galvanised an international socialist movement. In 1905, the Industrial Workers of the World (known as the Wobblies) was founded in Chicago.  The fight for fair pay and working conditions saw union organisers imprisoned, physically attacked for their beliefs.  The Wooblies are credited with forging the campaign for equal economic opportunity and pay for women and the establishment of day care centres for working mothers during World War II.

The international movement continued to grow and May Day became a day for celebrations.

Due to Covid-19 there will not be May Day marches, gatherings or rallies.  For many workers across the world they are jobless for the first time in their lives and the safety net of social security is needed more than ever.

That assistance demonstrates we are benefiting from the efforts of the protesting workers in the past.  Their fight for reasonable working hours, wages and conditions is the foundation of fairness in our communities.  Those activists and the millions that have followed in their footsteps were thinkers and educators.  The organisation of production, the regulation of wealth and development of state health, education and social systems would never have been achieved without these socialist activists and the support of workers. Fair tax systems are critical to the public health, education and social security systems.

We recognise there is great hardship and acknowledge the continued struggle for safe and fair workplaces, but we also celebrate the protections we now have in place.

The NZPFU continues to support and benefit from a national and international workers’ movement.  Our global alliance of firefighting unions provides knowledge, resources, assistance and comradery.  Through this global alliance we have access to the latest research and renown experts in health and safety.  The NZPFU campaign for presumptive legislation is just one example of where we draw on that experience and the generosity of our alliance.  There is much work to do but together we can continue to advance safer and fairer working lives.