Notice from the NZPFU President

I am writing to you as your President to explain just what has been happening with our negotiations for a renewed Collective Employment Agreement (CEA). Matters over the past week or so have been happening so quickly that you will appreciate it is not always easy to get substantial information out to all members.

I probably need to go back to the start of the current negotiations to make this easier to follow.

The Union and the employer started negotiations around the end of November in 2010. Our current CEA expired on the 31st December 2010. The first meeting was more or less just a meeting for each party to put on the table their claims and to agree on a document that sets out the rules for the bargaining process. This document that is signed by both parties and is binding is called the “Bargaining Process Agreement” (BPA) which is a statutory agreement under the Employment Relations Act 2000, section 32.

The employer produced a draft BPA for the Union to peruse and to either agree to or suggest changes to. The Union and the employer discussed only one clause and that was the clause that related to the employer passing on information to members via their intranet. Members will be aware that this matter was a concern to the Union at the last bargaining round, which ended in 2009.

This clause in the end was agreed on the grounds that there was legislation due to be passed into law in April of 2011, and to that end the Union agreed to abide by that legislation.

There was another new clause in this BPA that the Union saw and had no concerns about, because in the view of the Union, the process outlined what was required under the Act in any case. The clause was as follows. 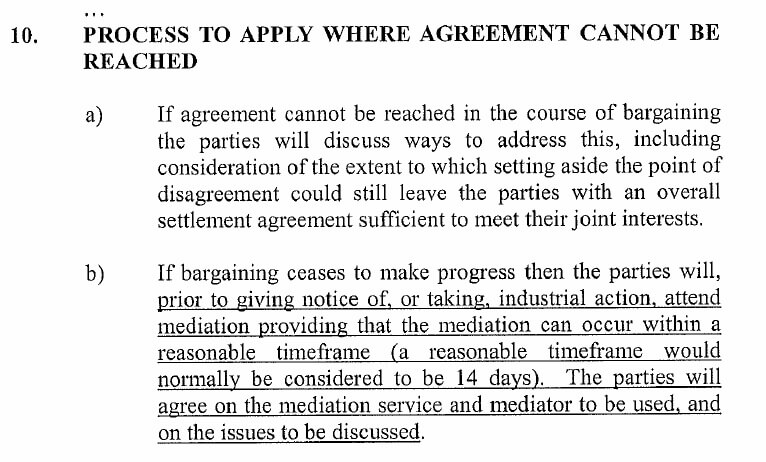 The underlining was not in the original document.

The Union and the employer met on several occasions during the first part of the year, 2011. At a meeting on the 2nd May 2011 the Union met with the employer and after some deliberations and an attempt by the Union to get to a point in bargaining that would enable us to bring an acceptable offer back to members for ratification, the parties agreed that agreement could not be reached.

In the middle of June the Union issued strike notice to the employer for a strike commencing 1st July 2011. The Union expected to go to mediation before the strike commenced. The Employment Relations Act states that where an emergency service gives notice of strike action, 14 days, the Labour Department CEO will arrange urgent mediation for the parties to try to stop the strike by agreement.

Mediation was scheduled for 23rd June in Wellington. The Union and the employer attended. The Union expressed to the employer the main reasons why members rejected the offer from the employer. The employer stated that they may be able to come up with a better offer and the Union agreed to another day of mediation on the 30th June 2001. This has been reported on in Notices to Members.

The recent Court action was the result of the Union asking the Court to take over the matter that would normally be heard in the Employment Authority. In the Court after the Union had agreed to postpone the strike action; the one issue in the case was the interpretation of Clause 10 (b) of the BPA.

The key decision of the Court appeared to be what was meant by the wording above, especially the part that says, “the parties will, prior to giving notice of, or taking industrial action, attend mediation”.

It is, and always has been, the Union’s contention that this means, that prior to giving notice or taking industrial action, one or the other, the parties would attend mediation. In actual fact the Union was backed up in this opinion when the witness for the Fire Service, twice, asserted that he thought it meant the same thing. However the Judge knew different and actually discounted the employers’ only witness in this case.

So, this is where the situation lies at this time. The Court decision (which the Union considers to be wrong) means that we cannot exercise our otherwise lawful right to give notice of strikes until after further mediation has occurred.

In accordance with the Court’s directions we arranged mediation for Monday the 11th July 2011 at 16:00 hours, but the employer has stated they are not willing to attend mediation until the 19th July 2011. That is a full 9 days after the court decision.

The Union considers that the employers’ action is solely for the purpose of giving them a longer period without strike action.